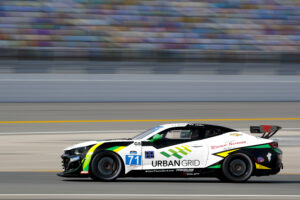 DAYTONA BEACH, Fla (27 January 2021) – Rebel Rock Racing wrapped up a three-day Roar Before the Rolex 24 test session at Daytona International Speedway right on plan, putting the final touches on preparation for the No. 71 Urban Grid Chevrolet Camaro GT4.R for Friday’s BMW Endurance Challenge, the opening round of the 2021 IMSA Michelin Pilot Challenge.

Frank DePew and Robin Liddell logged six hours of practice during the test, with a best lap of 1:55.538-seconds. Liddell was fifth-fastest in Saturday morning’s rainy session.

“I feel like we’ve had a successful test,” DePew said. “The car has been slowed down quite a bit [by a significant off-season Balance of Performance adjustment], so I’m not sure how competitive we’ll be, but we’re going to do the best we can.”

“I certainly think we’ve got a good package and we can have a good race, even though we won’t have the speed that this car is capable of,” Liddell said. “Then we’ll just have to see what everybody else does and how we can move forward.”

At four hours in duration, Daytona joins Watkins Glen as the lone endurance events on the 10-race schedule. This year, the team will use a two-driver lineup for the long races as DePew continues to accelerate his progress in the IMSA ranks. 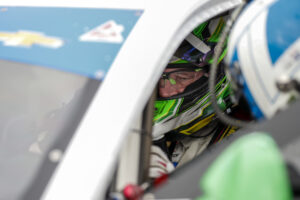 “We’ve made a decision that Frank’s going to do more driving,” Liddell said. “He’s at the point where he has been progressing at this level and getting quicker, and having the extra time in the car in the race is ultimately a good thing. It gives me a lot of driving to do, but I think overall it will be quite interesting to see how it all works out.”

DePew is up to the challenge of opening the race with a double-stint of approximately 90 minutes.

“This will probably be the first time that I’ve raced more than an hour and a half or more straight,” DePew said. “I’m looking forward to spending more time in the car.”

While slowed by the BOP adjustment, Rebel Rock is looking to capitalize on the durability and reliability of its Camaro to build a foundation for its full-season campaign.

“I think we’ve got a well-gelled team now,” Liddell said. “We rolled off the trailer with a very good setup. The car was good from the beginning – balance and handling wise – and that’s testimony to some of the work Pratt & Miller is doing away from the race track. Charlie (Ping) our engineer is a good strategist and the guys are doing a really good job in the pits, so I think with all of that we can execute very well. If we’re in the hunt at the end, that’s really where we will find out if we’ve got a car that can compete or not.

“Our main goal is to maximize the points, and bigger-picture wise, try to smooth out some of these peaks and troughs we’ve had in the past. If we can just smooth that out and be more consistent with our results, hopefully we can find ourselves in a good spot at the end of the year.”

Practice for the BMW Endurance Challenge begins with a one-hour practice beginning at 1:45 p.m. (all times ET) on Wednesday. Thursday will have a 45-minute session at 9:45 a.m., followed by GS qualifying at 2:45 p.m. Friday opens with a 20-minute warm-up at 9:10 a.m. The BMW Endurance Championship gets the 2021 season underway at 1:10 p.m., and will be televised live on the IMSA TrackPass on NBC Sports Gold.